RTC version 6.0.1 is available since end of December 2015. I ran a test to find out if the Rational Team Concert Extensions Workshop still works with RTC 6.0.1. This is what I found.

The version 6.0.1 does not ship Tomcat any more. The Rational Team Concert Extensions Workshop explains how to debug deployed extensions on a Tomcat test server. How does this change the workshop?

Important note: Debugging on Tomcat is only presented as an option, it can be useful if an extension has been fully developed on Jetty, but shows a different behavior on a real environment. Using this technique to develop an extension step by step is not a suggested procedure, instead using Jetty is the preferred way. From this perspective, Section 1.5 in the lab is unimportant for the rest of the workshop and this step could actually be skipped.

Update the issue is fixed:

Here some changes that make the workshop more effective. They are described in the workshop in several notes, here a more explicit description.

Section 1.1 Download and Unzip the Required Files from jazz.net

The easiest way to do the Rational Team Concert Extensions Workshop I have found is not to use the Web installer, but to use the ZIP version of RTC.This requires sone minor changes to the sections 1.1. and 1.2 as described below.

In step _b: As alternative, download the ZIP version of RTC named “Jazz Team Server and the CCM Application, and Trial licenses for Rational Team Concert”. 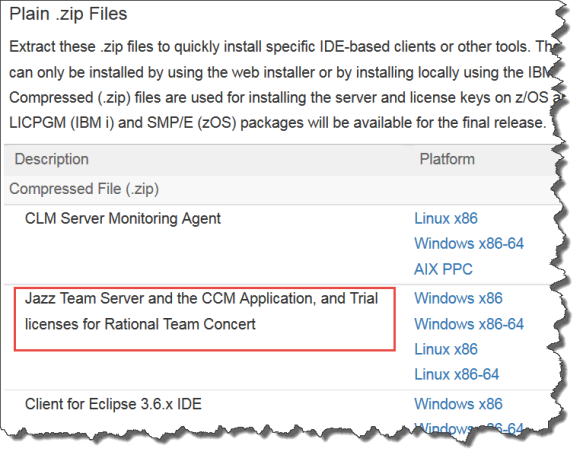 If you want to follow the steps from the Rational Team Concert Extensions Workshop and use the web installer, or a the IBM Installation Manager install, make sure to install

1.1__3. Install the RTC Eclipse client and a test server.

In step _b: To install the zip version of RTC, extract the zip file JTS-CCM-keys-Win64_6.0.1.zip you downloaded for “Jazz Team Server and the CCM Application, and Trial licenses for Rational Team Concert” to the folder:

Instead of Tomcat RTC and CLM 6.0.x bundle WAS Liberty Profile.

On windows I have followed the original descriptions in the Extesnsions workshop and added the Java options to the server.startup.bat and it worked for me.

However Lewis Tsao reported in the comments below that on Linux there are changes. He reports the server just dies if he uses suggested lines. He found the article https://jazz.net/wiki/bin/view/Deployment/EnableLibertyRTCServerDebugMode. Based on this, even on Windows it might be worth exploring this and follow the link above. For mode details look at his comments below.

The windows version of this file has sometimes problems with some Java versions, because the parameter order is kind of skewed. During development of the tool, this never came up. It will be fixed in a newer version.

Follow the other suggestions to consider and change the file if needed and perform the rest of the steps as described.

For an unknown reason, the project was not initialized. Right click the project in the Team Artifacts view and click initialize to finish the project setup, if this happens.

If the changes to the server.startup.bat in section 1.3 where successfully performed, this section works the same way with the server deployed on WAS Liberty Profile.

change the memory available for the [RTCExt] Create RTC Test Database launch. The original setting is -Xmx256. With this setting I got a memory error in the JUnit test that creates the development time repository database.

Change the memory setting to -Xmx512 as shown below. 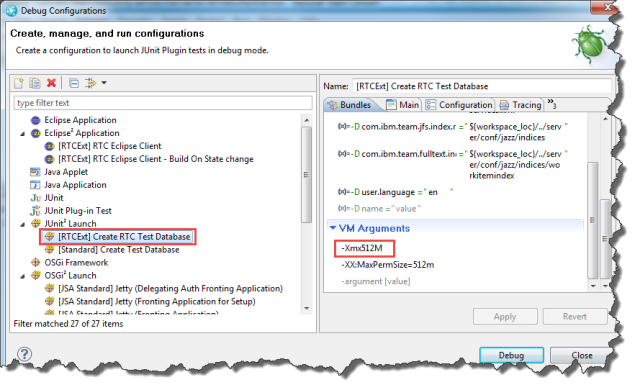 The Launch shows a missing bundle. 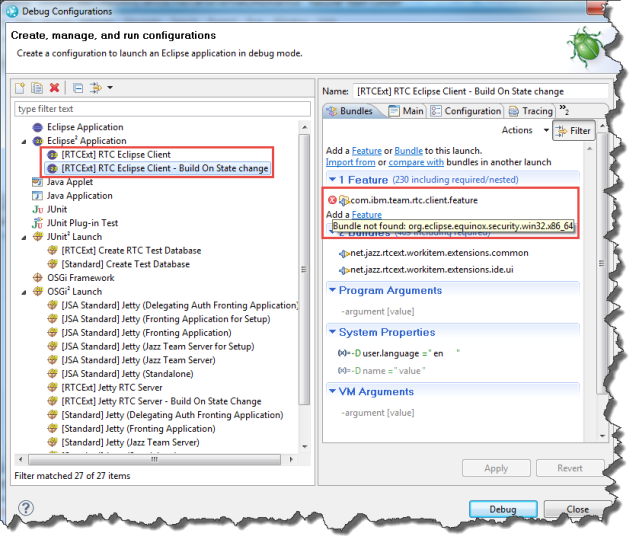 This missing bundle does however not prevent you from running the launch and as far as I can tell at this point in time, the workshop is still working. You can remove the missing bundle as well.

The rest of the workshop should work as desired.

The  Rational Team Concert Extensions Workshop still works for version RTC 6.0.1. I will however try to find some time to do an overhaul for RTC 6.0.2.

34 thoughts on “Running the RTC Extensions Workshop With RTC 6.0.1”

This site uses Akismet to reduce spam. Learn how your comment data is processed.